The Scale of Meaning 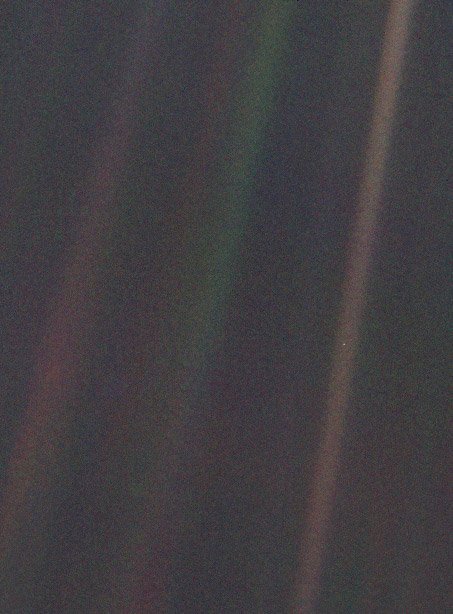 The image on  the left, for those of you who don’t know, is the last image of Earth that Voyager 1 took as it left our solar system by request of Carl Sagan.

I’m not going to relay the script that Mr. Sagan spoke in the video exerpt of  Pale Blue Dot: A Vision of the Human Future in Space

. I am, however, going to press the importance of scale.

Meaning, for all intents and purposes of this blog, is going to be isolated to the scale of 1:1 of a human being’s experience. It seems to me that the bigger something is in size, the more value it holds in its meaning. Concurrently, the closer something is to the observer, the more meaning it holds. Could one then say that these two sliding scales define the impact of the observer?

Here’s a set of examples that I’ve been mulling around with in my head:

In Fig. 1 The top bar represents percentage of conceivable size to the observer. Say, from one pixel across all the way up to the the Eiffel Tower sitting in your back yard. This can also mean an event, such as a fly pooping on your shoulder all the way up to the Berlin wall coming down. The second bar is percentage of conceivable distance. An atom’s distance away from your eyeball to the the clouds in the sky. I’m trying to keep this as human scale as possible. I would’ve said the star V762 Cas (in Cassiopeia), but I want to keep this imaginable.  See that silhouette? That’s you.

In the above example a “medium sized” event is occurring at a medium sized range.  Such an event might be someone witnessing a polar bear running through the mall while wearing a hat. The viewer may experience a “wow” moment, share the event with surrounding people or the various social pipelines available within an arm’s reach.

Fig. 2 shows a much more intimate experience. This might represent a person stuck in their house as it is uprooted from the ground during a tornado. The “meaning” of this experience, should our poor example person survive, will be much more profound than if they were to watch it on the news. This would be an event that would not be short lived in the mind of the observer. This is also the most empathetic experience should a loved one be involved.

The Arab Spring, Stalingrad, Kosovo War and so on are major events that are far away from a typical American observer. These events that we know are major, are so far away, it is almost impossible to understand the profundity that they bring about. There is appreciation for the meaning, but at the end of the day, we can still sleep sound(ish).

An ant just died from heat exhaustion in a parking lot in France* while you were in Alaska.  The direct impact and meaning to your life is such a small number, it is simpler to call it zero.

The ant’s family from the prior example caught wind that your didn’t really care about that dead ant. It caught a plane and flew to Anchorage to come and bite you on the ankle. You swatted it off, and continued eating your moose jerky. This is an event that will be forgotten in minutes. Unless of course you saw the ant was carrying luggage; in which case, you might think about it for quite some time.

My point with all of this is that the meaning of events in life can be scaled. It depends largely on the proximity and “size” of the event in relation to the observer as well as how much vested interest the observer places on the event.

An example from my own life is when I drop my keys. I get horribly frustrated by this. To the point where I have to gather my wits, take a deep breath, then expend the necessary energy to squat down and pick them up. It is this energy expense for such a small task that bothers me. I assign more meaning to the even than I should thereby making it a bigger deal than it is. Likewise, I become rather apathetic when I cross the street sometimes. Even when there are tons of metal flying at high velocity right at the only body I’ll ever own. The reason I can afford the apathy is because of trust in the other humans involved. I believe that they didn’t just get out of bed today to go on a murdering rampage, hitting as many pedestrians as they could on their way to their local Murdering Drivers Association meetup.

If you want certain things to mean less or more to you, it is all about the scale you place on the event. Think about yourself and the size of the universe and then shrink down to the size of an atom for a moment. Relativity is funny like that.

On a personal note, if you like what you read here in my blog, take a moment and subscribe! There is a little button in the top right of the screen that says “Click to Subscribe”. Thanks so much for reading. Have a great day.

The Trick to Living in Now