So this past week was full of craziness.

About six months ago, I reached out to LifeHacker.com to see if they would be interested in doing one of their famous Night School series featuring PolyPlane as the presenter of sorts. I didn’t think much would come of it. Within a day of sending out the idea, both Adam Dachis and Adam Pash came back to me pretty thrilled with the idea. Flash forward seven months and about 20 revisions later and we had successfully produced five days worth of content in the form of the “Preflight” videos that I feature on PolyPlane and a solid 750 word writeup for each day.

It was received with pretty good response overall. I was totally expecting the technical backlash that it got from people touting this software and that software. My sole defense was that it was critical for everyone to be on the same page as I while doing the lessons. The software is second fiddle to the theory. A box is a cube is a rectilinear solid right? 🙂

Either way, with that crowd aside, the people who enjoyed it, enjoyed it with open arms. There were a few sales and the following on both Twitter and Facebook increased immensely. Twitter followers increased by roughly 50% and Facebook “likes” by about 300%.

I celebrated the small victory by splurging for a Vimeo pro account so I could embed HD video.

The whole thing also lit a fire under my &ss to start and finish the next premium video which should be up for sale next week on the site. It will be called “Output”. In brief, it shows the process of taking a 3D model and preparing it for 3D printing and laser cutting using the chair from Sketch to Model. I was able to record time lapse of the model being printed thanks to the guys over at Peak Solutions and laser cutting video was made possible by Marshall and Chester of Etchpop.com. While what was put out from those machines is totally awesome, I wanted to follow through with the video of showing how you can get your stuff made via Ponoko so I’ve ordered a nice print of the chair there. It should be arriving sometime this week. I’ll be shooting some time lapse of me doing the assembly and some nice shots of the finished parts. The print wound up costing around 200.00 because I wound up going with the “ultra fine plastic” and got the detail parts made of laser cut aluminum. Below is the one I made this week while filming: 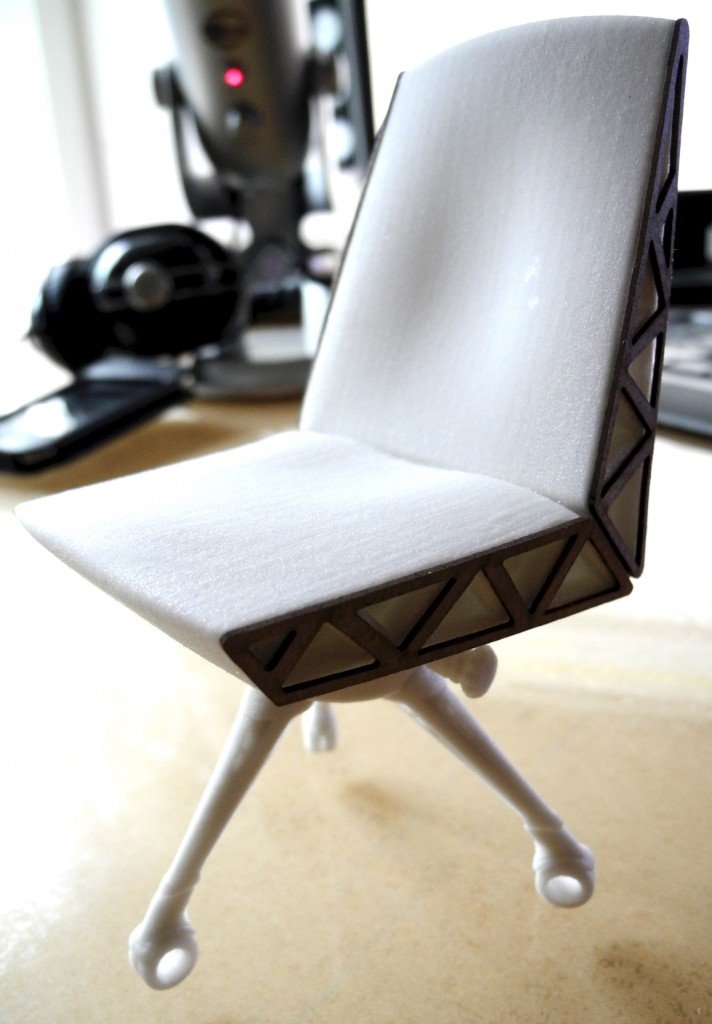 I’m really looking forward to releasing the next video. I think it will help a lot of people out that might be struggling with the topic of 3D printing. I learned quite a bit in the process too. It was a ton of fun.

Tomorrow I have to record the next PolyPlane video. Otherwise this weekend is all mine.