October 9th, 2014 I completed my 35th cycle around the nearest yellow dwarf star.

Amina, being the practical person that she is decided that the Assembly should be delivered to me on this day. But there were preparations to be made.  The night before, she told me that before she came over, I would need to prepare the following ingredients:

For a moment, I felt like I was dating Dexter: 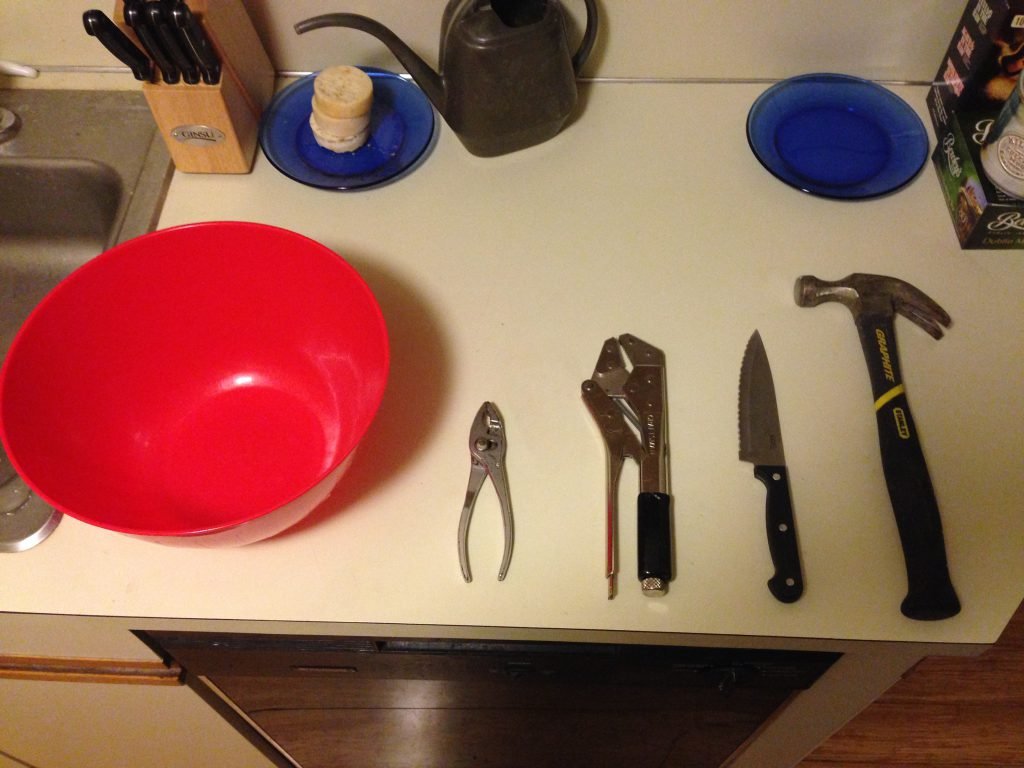 Once I had all of these elements prepared, I stood for a moment at my counter and just wondered. Normally, I’m the one that is creating the wonderment — this was a nice change of rhythm for me.

When Amina finally came over, I was instructed to sit down at the table. True to form, Amina created a wonderful level of suspense by forcing me to wait with my back to the door. She finally came around with this comically large white box tied with a large red bow (the measurements of the pieces of which were 25″ and 35″). Also I was presented with a candle and some matches. We lit the candle, and sat for a solid minute.

When I opened the box, I was greeted with an amazing little card.

An image that represented us and our connection: 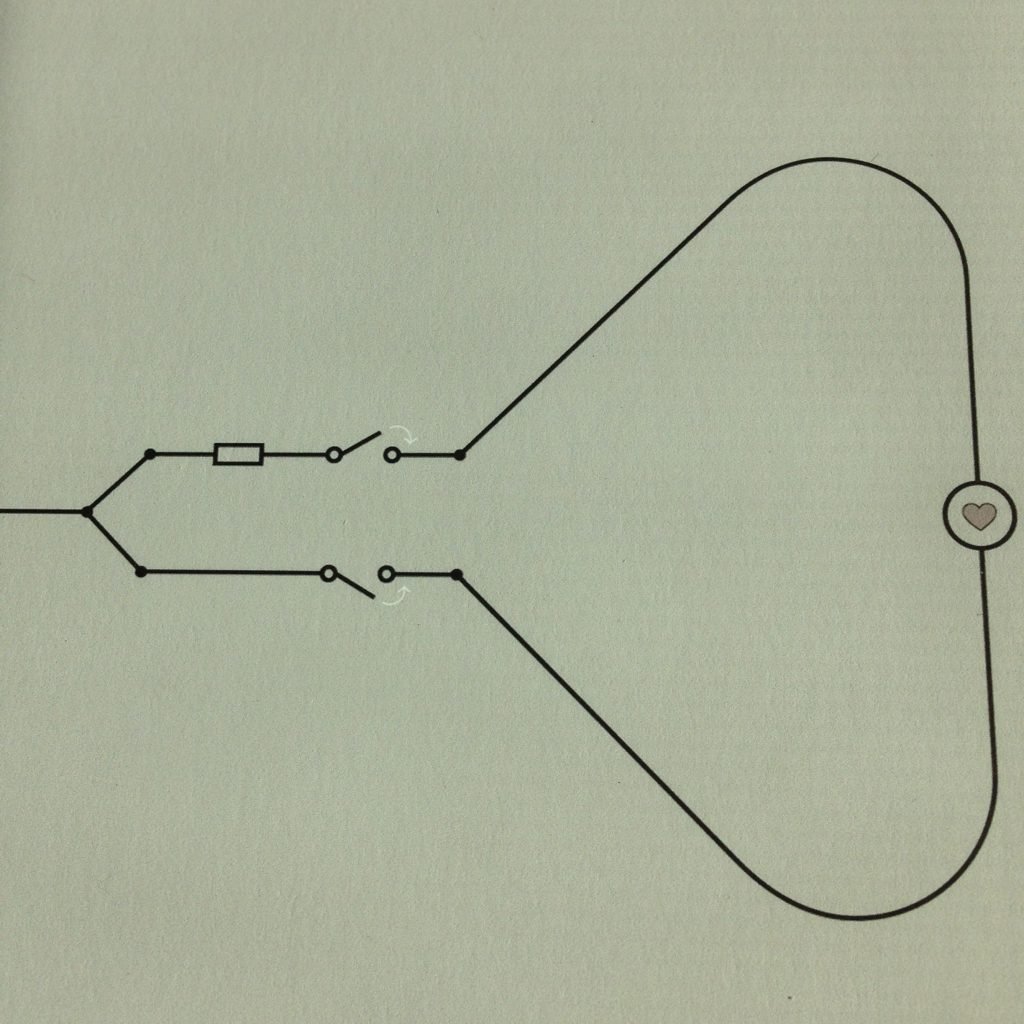 The top branch represents me. The small box is a symbol for resistance.

The bottom branch is her. In order for the circuit to the heart to be complete, one must close the switches. The resistance is based upon where I was in 2014 and the situations I was dealing with that made me unable to comply with the idea of a relationship. With enough time, the “current” could pass through and then I could decide to throw my switch.

It was beautiful. I had never received such a lovely gift.

When I looked closely at the base, I noticed something had been laser etched onto the base: 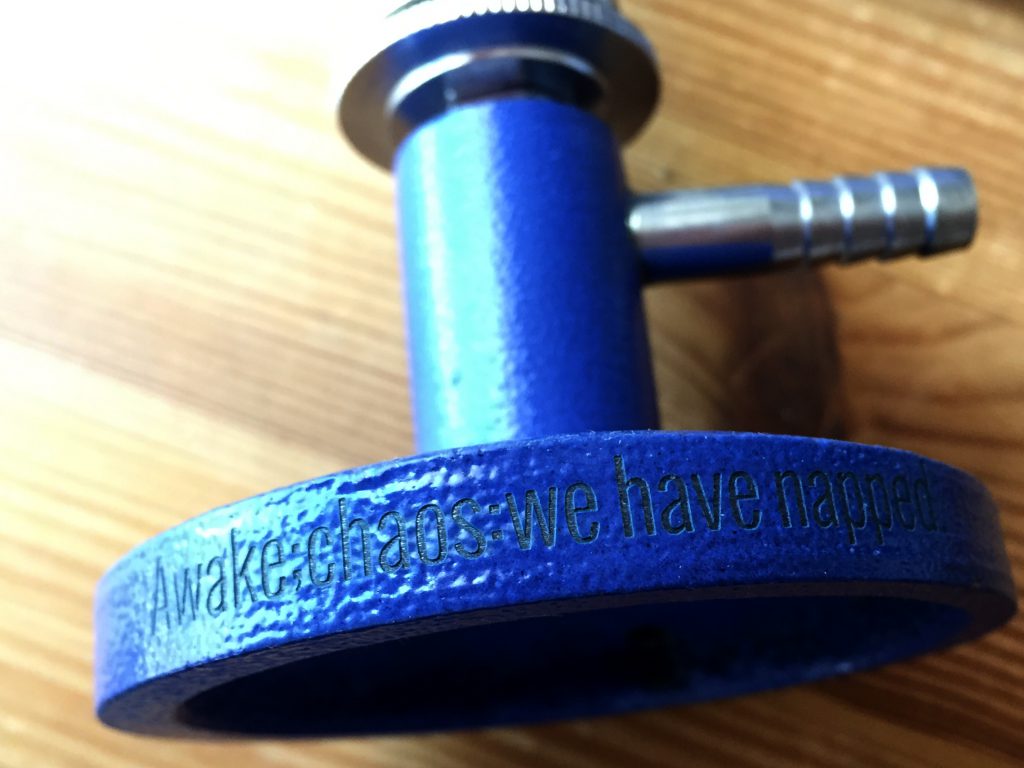 “Awake, chaos: we have napped.”

This also poked fun at how many naps I consume.

This whole kit of parts, had a secondary and equally poetic function. I assembled the parts to make an active bunsen burner. The propane burned perfectly upon the test run.

She then led me to the counter where the implements were nicely laid out and she took the candle and instructed me to use whichever of the tools I wanted to break apart the candle. This candle was substantial in diameter and pretty dense. It took many of good whacks, but I finally got the entire thing down into smaller chunks.

Being as it was my birthday, Amina felt that she should let me in on a tradition of carromancy. While she is the least woo-woo person I knew, I liked the idea behind it. Basically, you melt wax down in a pot and then pour the molten wax into a cold water bath. The forms that appear are used to “divine” whatever fortunes may come to you for the next year through interpretation. The Germans have a similar tradition called molybdomancy in which they do the same thing with little lead slugs heated on a spoon.

Our setup was quite a rigging! 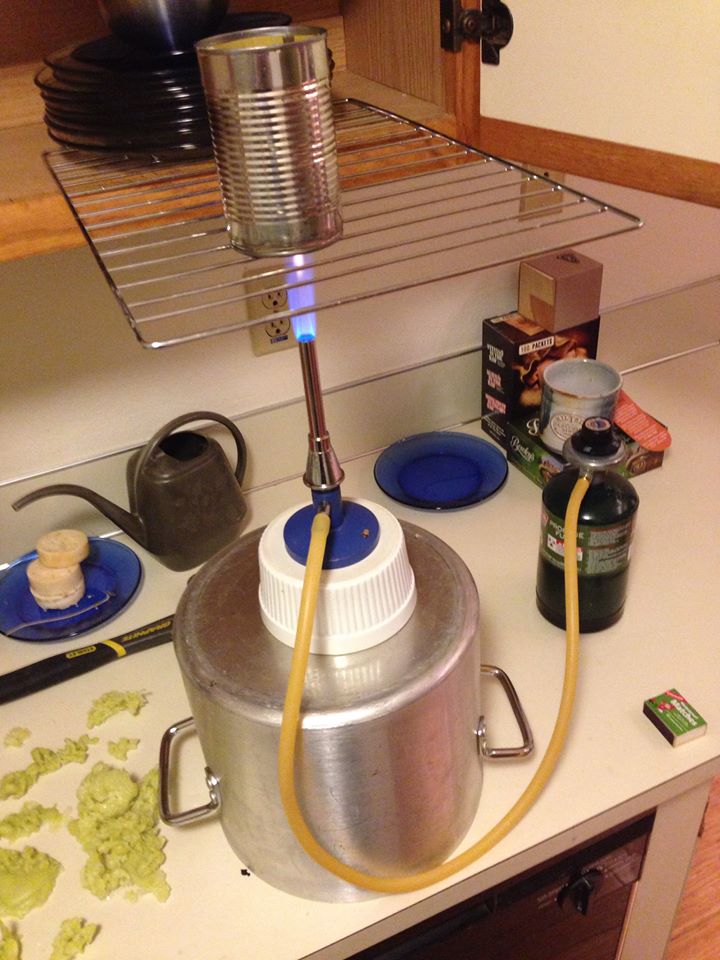 At the end, we had all sorts of lovely globules of wax to enjoy. Amina and I picked our favorites and set them aside to cool completely. At the end, I chose my 3 favorites and put them on my window sill with the intent of eventually having them cast into silver. I got to admire them for a while before they were accidentally pitched by my house cleaner. I was very sad, but I kept the bag that Amina give me the original candle in with all of the other pieces of wax, so I will cast more soon into the fire.

Next up: Some cactus, a map, a Hummer dealership, and some dirt.