In order to create a meaningful analogy you need to have the proper contextual information for the audience you are communicating with.

This is an equation for Newton’s Third Law: For every action, there is an equal and opposite reaction.

Needless to say, when given the gift that Amina put together for me. I became inspired to reply with this this new sculptural language of dialog that she introduced me to.

I need to flash back to an evening we had month’s prior. She was feeling down. To make her feel better, I had her repeat after me.

“Stand on one leg.”
“Raise a fist with the opposite arm as the leg you stand on.”
“Now proclaim, I believe in the power of cinder blocks!”

Reluctantly, she complied. We hugged. The night went on.

There is a very specific, almost shamanic, power to derailing a person’s state of mind.  By interrupting your brain’s normal patterns, you can disrupt an emotional state and reframe the context of your thinking. By asking her to take a pose and proclaim a ridiculous statement, I was able to interrupt her emotional slump and make her focus on something that would be so outside her current focus, she was able to pull out of the state.

Later it became a statement we use extremely sparingly to exclaim that we love each other when “I love you” just doesn’t do it.

Using that as a leaping off point and with the Assembly experience from her in hand, I immediately wanted to set the wheels in motion to define one for her.

To start, I’d need to come up with some words that evoke a sense of who she is as a person, but something that was strangely familiar. Cinder blocks as a starting point was a good place to begin. 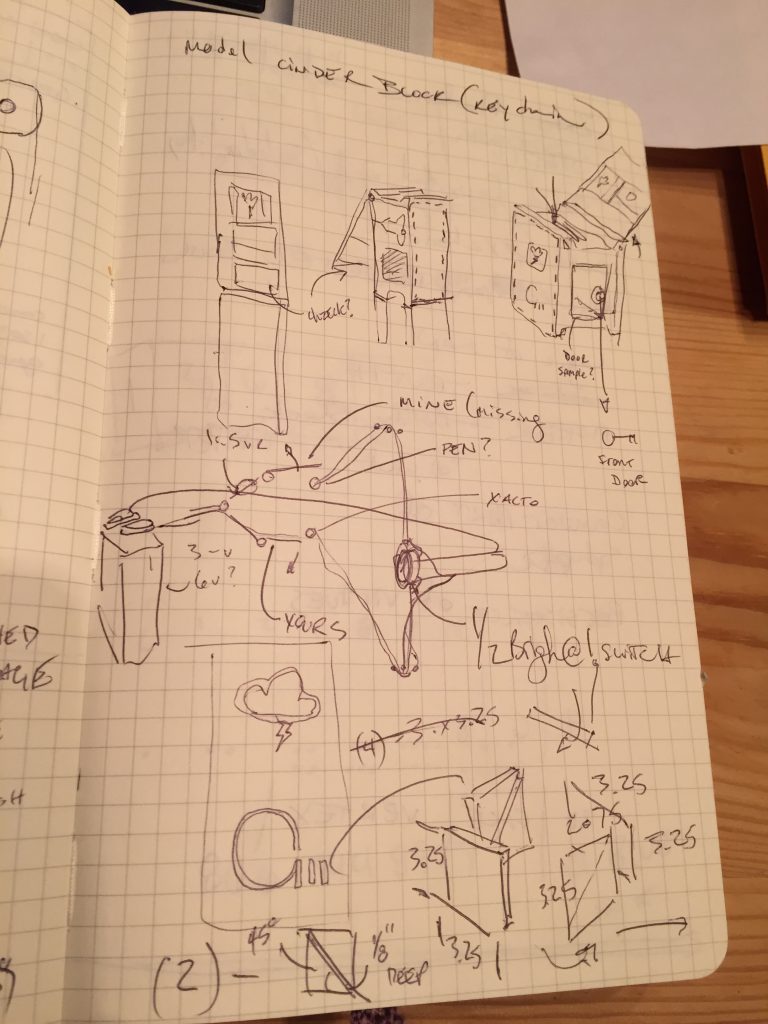 This exploration might have been too literal of a takedown from the idea. So I simplified. A simplified cinderblock could be a rectilinear solid. However, a cinderblock proportions were too awkward to reflect who she is as a person. A cube however, this was a good place to start. Afterall, a cube has very specific characteristics that would play very well with who she is as a person.

As the second platonic solid, a cube evokes:

stability
solidarity
truth
a persistence of values
counterpart to the sphere
“the building block of what”
and in woo-woo circles, it represents the regenerated and perfected soul

Next lets look at the cube from a strictly analytical space:

This is a great place to start. When working on something for Amina, or anyone else for that matter, I always try to start with the “why” first. If you can define the why, you can define the layers that encompass it. This is the how, what, where, when, and who.

So the why, as an answer to the Assembly for me, was the bunsen burner. For her, it would make sense then if it was her defining object. The knife. But…that’s just the start.

I aimed to create a mystery that would unravel over the next 6 months in the form of coded messages, clues, optics, and an over arching labyrinthian experience.

The first thing to do was to get the ball rolling. In order to do that though, I’d need a map.

I walked to the gas station by my house and bought a map of Portland. I needed an excuse for her to plot some points. It just so happened that we were to harvest some cactus from her dad’s house in Niagara-On-The-Lake, Ontario that had been imported by way of Switzerland. We wanted the soil to mean something, so we decided that the soil should come from three locations: Her dad’s house, my family’s house in Michigan, and somewhere in Portland.

On December 9th, 2014, We went out to dinner and with our pen (another story) and map and then noted my house, her studio, and the place we first met (Heart Coffee) and used those and coordinates. I asked her to choose a number that would have significance to her. She chose 15 as it was the 15th of August when we connected romantically. I chose 4.5 as it was 4.5 months after meeting that we had our first emotional connection that would lead to us going steady. Effectively we chose the same date of significance. Because of the map size, she used 15mm to draw a circle around her studio (metric because she is Canadian). I drew a 4.5″ circle around my house (imperial because I’m American). We then added 15 + 4.5 and added a little more because we are more than the sum of our parts. You need the propellant and the aspirational space to become more than you are. We took 20 and drew a 20mm circle around Heart. Where the circles converged was the Cadillac dealership just north of the Portland Tennis Center. In the cold of night, we ventured to the field of Escalades and Hummers and found some soil on the side of the building to take. While the circles technically intersected what would be inside of the building, we weren’t quite ready to commit B&E for cactus dirt. 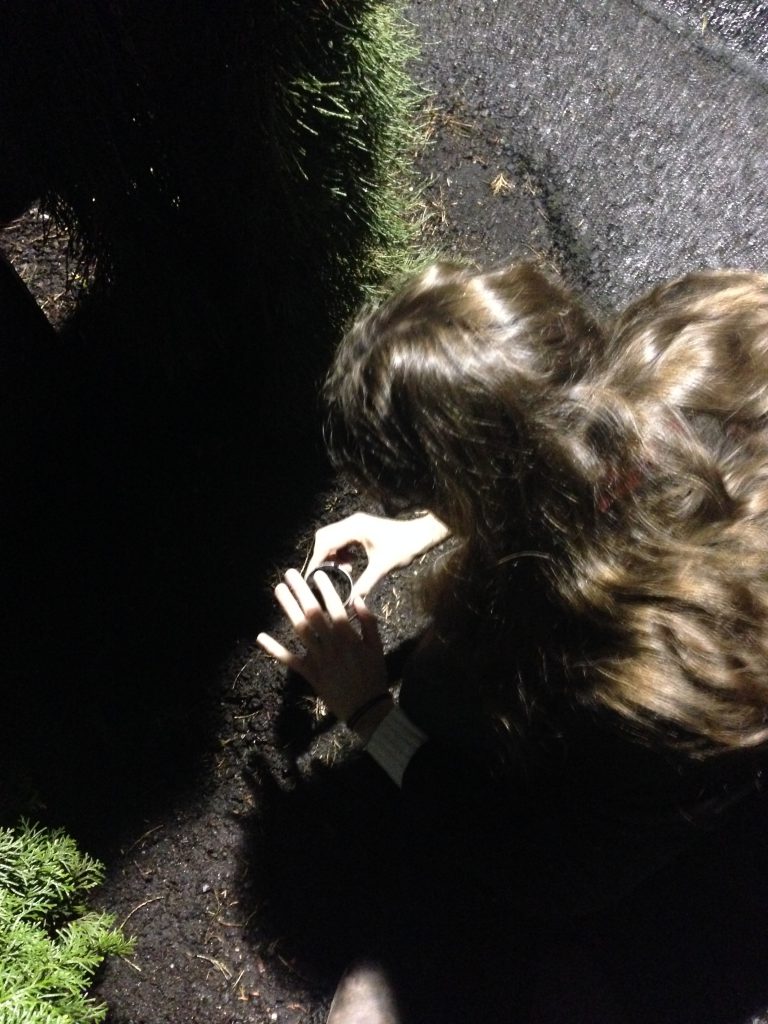 I now had a map with some good data to triangulate. I bisected the lines and then connected them center to center to center and got coordinates to introduce Amina to my responding Assembly. 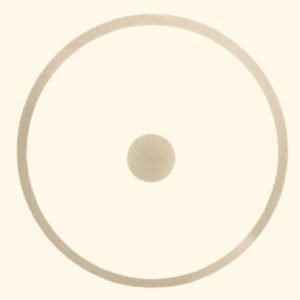 And the attached braille message:

The first notation is a nod to Sir Francis Bacon. Known for the conspiracy that Sir Bacon is responsible for some or all of Shakespeare’s writings, I thought what better to create intrigue than to start all messages using cryptic code. The braille reads, “Familiarize yourself”.

Next I sent along a text, asking her to meet me here: 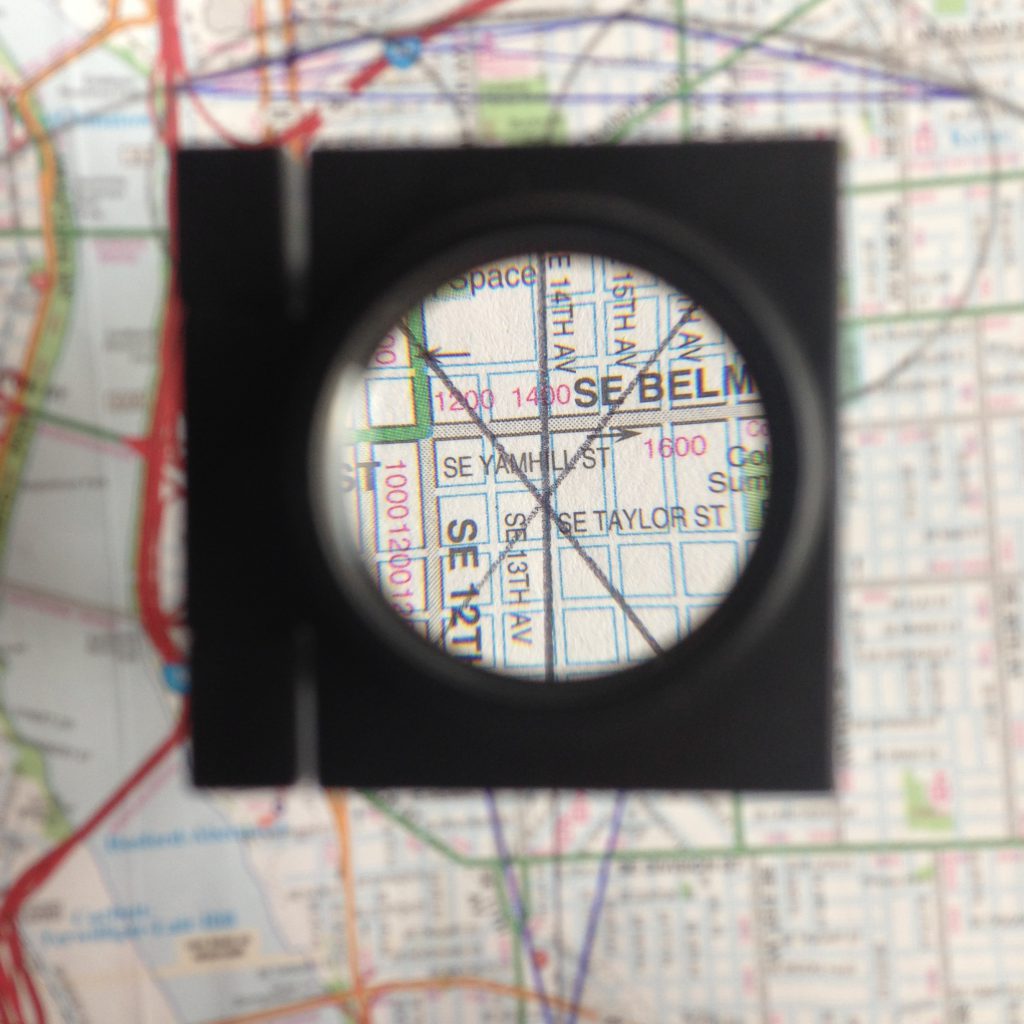 It was on this location, after her wandering the intersection and finding me on the porch of a random apartment building’s porch swing that I greeted her to sit with me. And then I delivered this small box with a ball and a note inside. 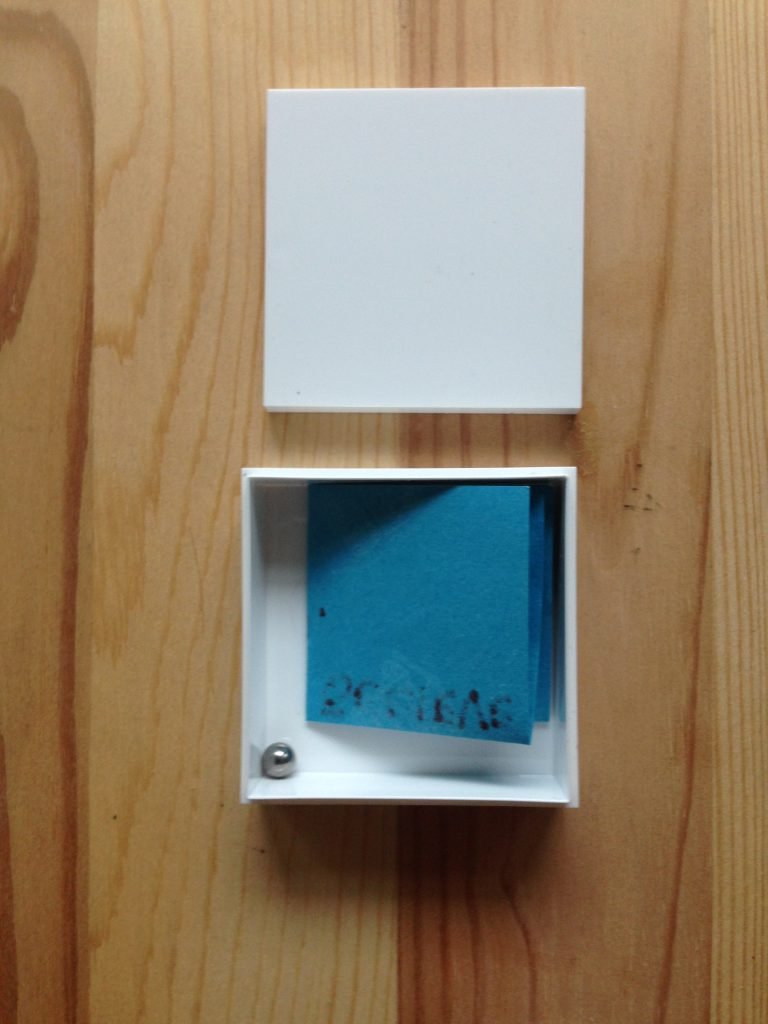 With curiosity, she stared at me.

Next up: The development and the elements.